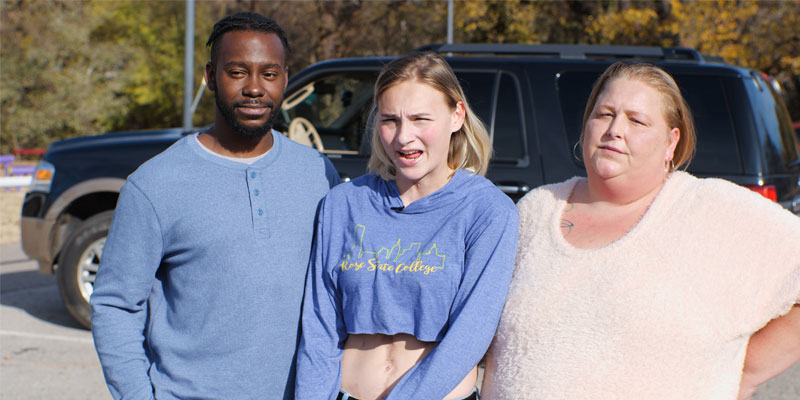 Check out Amanda and Jaron’s story, in their own words, about how Integrity went above and beyond for them while they were going through a very difficult time.

Amanda: We’ve had two vehicles through Integrity. This is actually the second vehicle we’ve purchased. I came to them shortly after my daughter was released from the Children’s Rehabilitation Center when she was first getting home. At that point, she was a lot more wheelchair dependent, she had to have a lot more equipment with her anytime we went anywhere. The vehicle we had at the time just was not capable of providing the room and the space and the comfort that she needed.

And they went way above and beyond. When they understood what my problem was, they went out of their way to make sure whatever vehicle I was picking out would be able to accommodate what she needed, with me being the one getting in and out of that vehicle.

Kristen: I have PTSD and anxiety and I go into panic attacks because of being in a car if the car doesn’t feel right. I can’t ride in a car that’s bumpy or sounds too fast or doesn’t have enough space or if it makes me feel crowded. It’s a lot. It’s a big list for me to be able to get into a car, and they listened to it.

Amanda: I would say that the thing about Integrity is they think of things that their customers do not. They think ahead of time of how they can make things the easiest for you. So when my daughter was having liver surgery in July 2017, in the middle of this, my daughter had some problems and she started hemorrhaging and we were going into the ICU.

The phone rang, and it was Integrity. The next morning I called her, I was a little concerned with why they would be calling me this soon — I hadn’t even had the vehicle 30 days, so I didn’t know what was wrong. The irony was that they weren’t calling to tell me that there was something wrong. They were very aware that my daughter was having surgery in July, and so they had talked to their financing managers on their own and had approached us with being able to pay our TT&L for us so that it wasn’t something we had to come out of pocket for when we had a worry that was going on with our daughter.

And, they had no idea of what I was going through, of how much that mattered or meant to me. It was a huge burden taken off of my shoulders, you know, trying to help in any way, shape or form, trying to make life as easy as possible. And so when we went to go get a second vehicle, it was a no-brainer where I was going. I was going right back to where I’d been treated like family for the last two years.

How Important are Vehicle Safety Recalls?