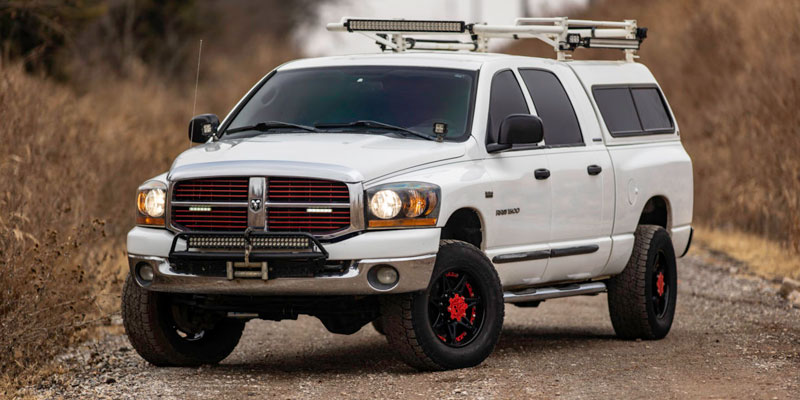 Take a test drive with Preston and Dontay in this fully-loaded, completely tricked-out Ram 1500 Mega Cab.

Preston Miller (Integrity Auto Service): This is the “Hunter’s Special.” It’s deer season; everybody’s going hunting. This is the perfect truck for those guys.

Dontay: This is nice! This looks different.

Preston: This truck is a 2006 Dodge Ram 1500. It’s a mega cab, so it has your 8-lug axle. It’s basically like a 3/4-ton, it just doesn’t have the towing capabilities. It’s a four-wheel-drive Hemi — it’s got the good Hemi in it; it doesn’t have the displacement where half the motor shuts off and wears the motor out prematurely. It’s a full-blown Hemi, V8. Mega cab has got a bunch of space in the back. It’s got room for days.

Dontay: See, that’s what I was saying — that mega cab. That’s crazy! That room in the back is just as much as up here.

Preston: And those [back] seats fold down flat if you need to haul something big, put a sleeping bag back there. You’ve got enough room for that. On the back of these headrests right here — on both of them, both headrests — they’ve got aftermarket DVD players. It’s got the DVD player under the seat down there so you can pop the DVDs in, put the kids in the back, keep them quiet, keep them happy.

Preston: The reason I called this the “Hunter’s Special” — the deer season truck — is it’s got a camper shell on the back. And whoever had this truck before us — it’s a one-owner truck, so whoever had it had it for quite a while — they built a little platform in the back of the bed where you can put your air mattress on it. It’s got pullout drawers. So, all you need to do is throw you a mattress in the back and it’s ready to go camping.

Dontay: Yeah! It was about to say, that’s camping, for real! I saw on the back, too, where there are drawers and compartments.

Preston: It’s all carpeted. It’s carpeted and everything. It actually has some power converters and deep cycle batteries. We didn’t check any of that stuff out because it’s aftermarket; we just left it in there. But I don’t think it would take much to get it all working and charged up and have all that for you.

Preston: This truck has eleven LED lights on it. They were all on there when we bought it. We checked them all out; all of them work. It’s got lights down on the front bumper. It’s got two up here on the hood. It’s got a whole bunch of lights on the camper shell. Big rack on the top. You can flip all these lights on and light up everything around you like daytime.

It’s got aftermarket exhaust — sounds good and sporty. It’s not too loud and obnoxious.

Dontay: I see a little wood grain inside, too.

Preston: Power windows, locks. It’s got Infinity stereo system, so nice speakers. It runs and drives great for a big ol’ truck. You’ve got all your switches — USB ports, all that stuff.

Dontay: Yeah, you’ve got three of them up front.

Preston: Four-wheel-drive switch is there. It’s got steering wheel controls for your stereo back here.

Dontay: You can hook up any kind of electronics you want, pretty much, with these USBs.

Preston: This thing is ready to go hunting. It’s ready to go to deer camp. It’s ready for a road trip. Whatever you need to do with it. You could pull a boat with it. A nice little camping rig. Maybe you’re an oil field guy, and you’re sick of getting a hotel room every night. You can throw you an air mattress in the back of this with all your stuff in it, and you can go on a rig, just hop in the back, and take a nap, you know.

Dontay: Exactly. That’s good. Good stuff. I can’t believe you found this one.

Preston: You know, I don’t buy a lot of the later model Dodges. We’ve had bad luck with the Hemis. You know, the new ones, half the motor will shut off and turn into four-cylinder mode to conserve fuel. And we found that it prematurely wears out the lifters and the camshaft. All those parts, the last time we had to do one, were on national backorder. It took three months to get. So we quit dealing with those newer ones, and we’ve stuck with these older Dodges. This one is an ’06. That seems kind of old, but I bought it because we’ve had good luck with them. They’re dependable, reliable. You know, it’s an actual Hemi — it doesn’t have the problem where it wares out and stuff. We don’t want to sell anybody a truck, and then they’ll have to leave it in the shop for three months waiting on parts.

Preston: Yeah, I mean this truck is completely reconditioned. It’s got 20″ Bone Collector wheels. They’re black and red. The grill’s painted red. It’s got LED lights underneath it. This thing is tricked out. It’s somebody’s hunting limo. All kinds of aftermarket stuff on it. We completely reconditioned it — new brakes, new suspension, new water pump. All kinds of stuff. We put a bunch of work into this truck to get it ready.

Preston: It’s backed by our Heartland Service Plan, so you don’t have to worry about any of that stuff. Where else are you going to find a truck like this?

Dontay: It’s nice, man. It’s already got all the bells and whistles you need to go camping.

Dontay: And I’m surprised to see that it’s in a condition where there’s not a whole bunch of scratches, dings, scrapes, and stuff. Even though it’s been used, it’s still in great condition. Whoever had it cared about it — dressed it up and took care of it. This is definitely going to be someone’s choice quick. Especially, like you said, for that person that likes to go hunting and take trips and is out in the field.

Preston: It’s a fun truck. It’s very unique. It stands out. You know, that’s kind of what we specialize in. We do special financing, so no matter what your credit score is, we can help you. If you’re worried about getting approved, there’s a good chance we can get you approved. Come down and see us. See Dontay, see the sales crew. Take this bad boy on an actual test drive, and you’ll fall in love with it. There’s nothing that you can hate about this truck. It’s just, like you said, all the bells and whistles.

And if you don’t like this one, we’ve got 45 other trucks out here. The majority of them are four-wheel-drive crew cabs. Anything from small work trucks, all the way up to big one-ton dually diesel four-wheel-drives. A little bit of everything.

How to Winterize Your Car