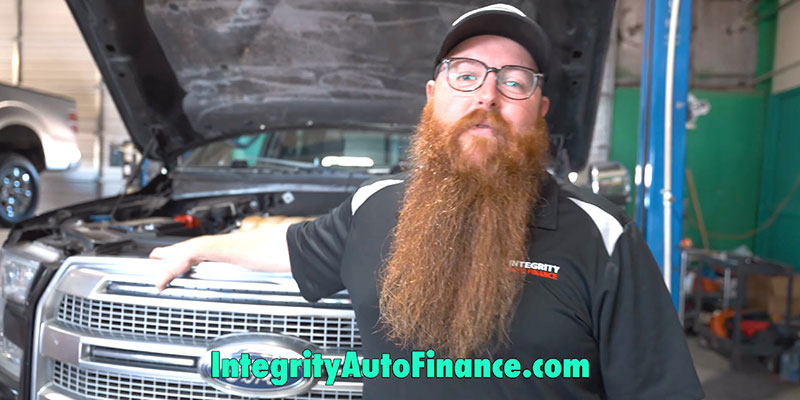 Preston and Willy take you through the recon process for this beautiful 2015 Ford F-150 Platinum truck.

Preston Miller (General Manager): Hey, guys! Preston, here at Integrity Auto Finance. I’m coming back with this 2015 Ford F-150 Platinum that we talked about last week, the fresh arrival from the auction. We’ve got Willy here — he’s our recon tech that’s inspecting this truck. He’s checked it out from top to bottom to let us know what it actually needs to get it ready to go on our front line for a customer. So, Willy, what did you find on this bad boy?

Willy: Well, let’s start under the hood. First, every car that we pull in is going to get a full synthetic oil change. Other than that, under the hood, everything was pretty good. It’s got a K & N air intake.

Preston: Yeah, I see that. That’s a fancy one.

Willy: So, power gains, not so much. But if you’re the type that likes to hear your EcoBoost actually do some work, it’s going to definitely make the turbos come through a little bit more.

Preston: I’m a fan of that turbo sound, so I get it. The 3.5L EcoBoost — great motor! What else did we find on this guy?

Willy: When we got it up in the air, we had a driver side inner tie rod that was out, so we’re going to get that replaced and a fresh alignment on it so it doesn’t wear out the brand new tires that we put on.

Preston: Yeah, that’s a really important thing. With the brand new tires, especially when you go with aftermarket wheels and stuff, they get really expensive. And if you’ve got an alignment that’s out or you’ve got a bad tie rod in or bad ball joint or something on your truck, those brand new tires you just put on there is going to make it seem like it drives a lot better for a little bit, but they’re going to wear them right back out. You’re going to throw money down the drain if you don’t fix the actual suspension problem. Got to take care of that. What else?

Willy: Moving to the rear, the rear brake pads are kind of thin, so we’re going to go ahead and replace those. We did find that the rear end is whining.

Preston: Okay. See that’s one of the things I was worried about. This thing, when I brought it from the auction — I drove it back — and the tires were so noisy, because they were choppy, that you couldn’t really tell how the suspension sounded. After the new tires are on it, Willy’s re-driven it. Unfortunately, it’s got some rear differential noise. We’re going to have to bit the bullet and fix it — it’s the right thing to do. What else we got? How about the interior? I know this thing is loaded with all kinds of fancy stuff, right?

Willy: The interior is very nice! We’re missing a couple of pieces. We’ve got a headrest that is missing, so we’re going to have to try to track that guy down.

Preston: Yeah, that passenger rear headrest. You know, I drove this truck around all day and I didn’t even notice it was gone.

Preston: It’s one of those things, you don’t even think to look at. I see you’ve got the sunroof open. It was making a little clicking sound when I drove it back. Did you figure out what that was?

Willy: I think there’s a trim piece that’s keeping it from fully coming back sometimes. I need to figure out what’s keeping that down and in the way. Might not take much.

Preston: This thing is nice — the woodgrain, the heated seats in the back, the panoramic roof in a truck! In a pickup truck!

Preston: So it actually massages your back?! Okay,… well, I know what I’m driving home tonight. All right, guys. This truck should be out; we’ve got to find a few little parts on it and get some reconditioning done. We’re going to make it like brand new again. We should have it out on the lot, hopefully in the next week or so. So stay tuned! If you like this truck and you want to come test drive it — you want to feel these massaging heated seats for yourself — you can come take a test drive with me or Dontay. Just come down and see us when the truck is ready. Like our Facebook page, because we’ll be doing another Facebook video on this one for sure. So, thanks for checking it out and we’ll see you next week!

How Important are Vehicle Safety Recalls?