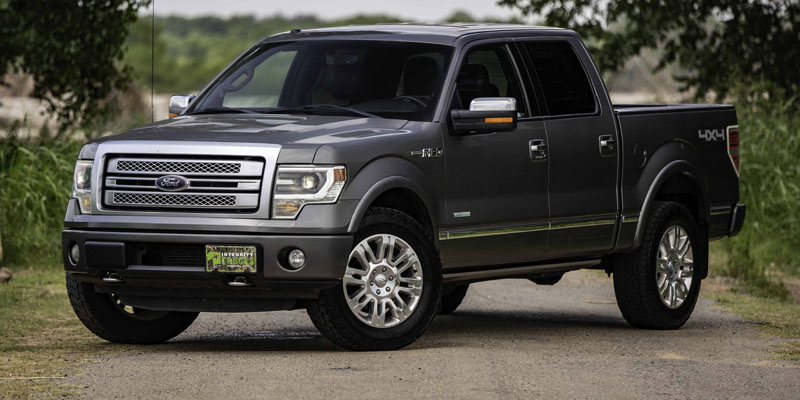 Check out the a recent addition to the lot — a 2013 Ford F-150 Platinum. Watch the video below to get an inside look at a test drive with Preston and Karla.

Preston Miller (Integrity Auto Service): This is a 2013 Ford F-150 Platinum. Platinum is going to be your pretty much top-of-the-line. As far as F-150s go, they have the King Ranch, the Platinum and the Limited, so this is one of the top-of-the-line trucks.

Karla: It’s a platinum everything in here!

Preston: It’s more luxurious — the King Ranch is kind of western-looking inside, with saddle leather. The Limited is a little more sporty. This one is more the luxurious model — all the woodgrain stuff, the brushed aluminum, the touchscreen, heated and cooled seats, navigation. It’s got a sunroof; it’s the EcoBoost, so it’s the 3.5L twin turbo — good on gas, plenty of power. It’s got every option you could want.

Karla: It’s so freaking loaded. And that’s the thing, it does not do it justice to try to describe the trucks over the phone.

Preston: That’s why we do these test drive videos to kind of get people an idea of how nice these trucks are.

Karla: Because all day long on the phone, I’m like, “Well, the truck is really nice; it’s really nice. When you literally sit in it and see it, it’s nicer than I can say.”

Preston: A lot of people say their cars are loaded, but this one literally has every option.

Karla: And the interior — it just looks like it was kept so very well. I don’t see anything out of place, a scratch, nothing.

Preston: Yeah, super nice truck. 130,000 miles, comes with a service plan, and it’s been completely reconditioned, so anything we found that was wrong with it, we would have fixed.  The oil is changed — we do synthetic oil changes on everything. Anything that we found that it would have needed we took care of. All that’s done, it’s ready to go — and that’s when it comes to the service plan, also.

Karla: That’s what people, I think, most of my customers, really take comfort in, is that service plan. Because, you know, other Buy Here Pay Heres, you just get the car and it’s like, “Oh, well…” But we actually will service the vehicle and make sure that it stays running for you.

Preston: Buying a car or truck is one of the biggest purchases you’ll ever make, you know. It’s a lot of money to spend. So you want to have peace of mind that what you buy is going to be running and get you where you need to go; that’s why we cover it under the service plan and make it as easy as possible. If you do have any car problems, you bring it in, we fix it, you pay the deductible, and you’re out the door.

Karla: Perfect. And a lot of customers take comfort in that.

Preston: It’s got the Sony sound system, too. It’s got a little subwoofer under the back seat. Sony speakers. So, it has a really awesome sound system from the factory. It’s got everything, everything you could want.

Karla: I like the way the dash lights up. It’s so cool, so tech-y.

Preston: If you want to take an actual test drive on this truck, call Karla and we’ll get you in and out as quick as possible!